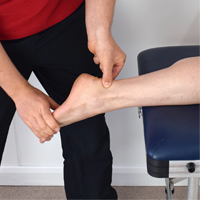 Tendon pain is often referred to as a tendinopathy, this can be defined as the failed healing response of the tendon. This is typically associated with many conditions that are brought about through overuse in and around the tendons. This is a common pathology observed in runners.

In comparison to muscles, tendons have an oxygen consumption rate 7.5 times lower, this is essential to carry loads and maintain tension. Subsequently, the low metabolic rate leads to a slow healing rate in the tendon.

A term that has previously been used to define tendon pain has been tendonitis. Simply defined, this refers to the inflammation of a tendon. A tendinopathy has been previously classified as the degenerative change of a tendon with an absence of inflammation. Research has reported that this is not true, instead, chronic inflammation is present in the majority of these cases but the exact role this plays on pain and function is an unknown. Alleviating this inflammation isn’t necessarily the ideal answer, the use of NSAID’s* can be detrimental to the healing process.

The classic presentation of a tendinopathy is after a period of increased activity, whilst the increase in subsequent load relates to the pain that is felt. During the early stages of its presentation, pain can be felt at the start of an activity, disappear during the activity and then re-appear during a cool-down. This pain is typically localised and can be described as a severe or sharp type of pain. When this has been present for some time then this pain can be described as a dull ache in nature.

Tendinopathies can often hang about for a long time, depending on the type of care you have been given it can either get better or still be painful. This gets you wondering, how else can I alleviate my symptoms without having to do those monotonous exercises. A well known treatment technique for tendinopathies has been steroid injections. This is purely up to what you feel is best for you, here we talk about steroid injections. If your rehabilitation is completed to a high level and the exercises are targeted correctly the pathology should disappear over time. Ultimately, it boils down to the effectiveness of the exercises and your own buy-in to the exercise prescription.

We are able to treat and manage all tendinopathies that present themselves. Book in for you treatment so we can help and assist you.